High blood pressure is the most prominent public health challenge because of its clear association with a higher risk of mortality and being the third cause of disability-adjusted life-years worldwide. According to Kearney et al. (Lancet 2005; 365: 217–23) more than one billion people had hypertension in 2000; the prevalence of hypertension was estimated to increase to 1.56 billion by the year 2025. Uncontrolled or poorly control of hypertension accounts for one-half of coronary heart disease (CHD) and about two thirds of cerebrovascular accidents.

As a chronic non-communicable disease, the consequences of hypertension in terms of heart disease, stroke, and renal failure could be markedly reduced by adapting healthy dietary recommendations such as reducing salt intake and increasing the proportion of vegetables in meals, augmenting physical activity, and adhering to prescribed medications. 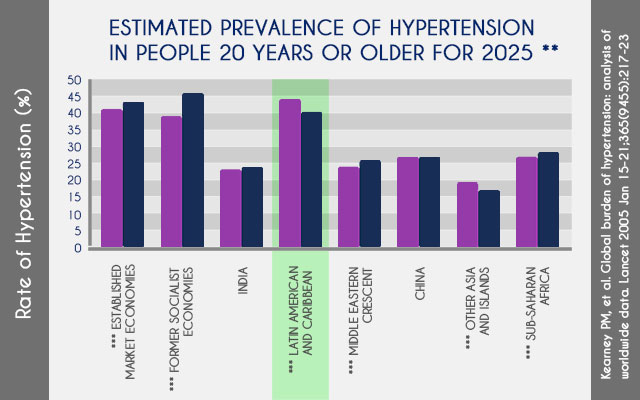 The Inter-American Society of Hypertension (IASH) is a non-profit organization devoted to the understanding, prevention, and control of hypertension and ...